Seven Dials and around
On Monday this week (i.e. 13 May) I visited Brighton for my photography project. I’m trying not to get into a routine, but sometimes when I get off the train – in this case at 9.20 am – I head straight up steep Guilford Road from the train station up to the Seven Dials area and around.

Seven Dials itself is the point where (you guessed it) seven roads meet but unlike its London namesake there is no monument in the centre, just a plain roundabout. At the moment, there are a load of roadworks going on to improve safety, as it’s a bit of an accident blackspot – 44 people injured in the last 5 years.

On the plus side, it’s a pleasant residential district with some nice cafes, local shops and restaurants, and an overly photogenic shop selling mainly mannequins. I used to work at a delicatessen in Seven Dials called Appetites – probably the only job I’ve had I didn’t hate – but the deli is long gone, and there’s no blue plaque to mark my employment. I’ve taken a few promising shots of roadworks and street furniture here on previous visits.

Heading downhill and ducking under part of the railway viaduct, I moved on to the Preston Circus and London Road area, where for the first time I came across a piece of characteristic Brighton oddness. 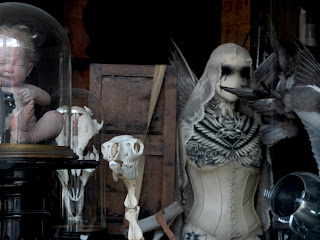 The EatonNott shop offers a “highly acclaimed range of bespoke couture garments … created out of the pelts, feathers and bones of animals that have been killed and eaten as food, have been accidentally killed on our roads, that have died of natural causes or been culled as pests.”

Presumably the baby on the left wasn’t roadkill, but something else. Anyway, I certainly will be coming here for all my couture roadkill needs, which are quite extensive. I don’t think I’ll be using the photo though – it’s just a quick record shot of something unusual, someone else’s artworks. Almost like taking a snap of the Mona Lisa.

As I headed along London Road on the way to the town centre I noticed an interesting café-type place, and had a quick sit down and a coffee. 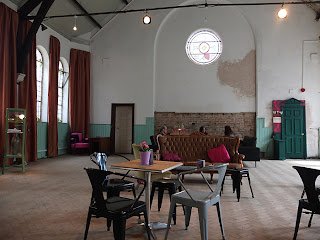 [record shot: The Emporium – café by day, theatre by night (out back, not shown).]

The Emporium’s canteen is situated in an old Methodist chapel and had only been open a few days – there was still some plumbing going on. Out back (and the real reason for its existence) is a 230-seat theatre. Everyone seemed very friendly.

Sussex ice rink
I was interested in tracking down the old ice rink that I had read about on a community notice-board on a previous visit. It’s situated right in the centre of town but I wasn’t previously aware of its existence. The former rink is located at the end of Queen Square, which is actually a short rising cul-de-sac close to Brighton clocktower. The small rink has been closed since 2003, and the now-defunct sign shown used to read “Sussex Ice Rink”. The latest plan, I believe, is to turn the area into a luxury hotel. 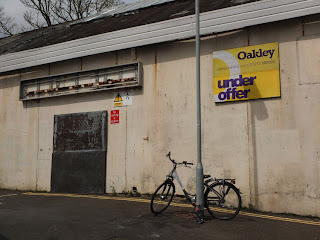 The tree behind the building is in the grounds of St Nicholas' Church. There was not a lot else that caught my eye in Queen Square apart from a taxi rank and, for one day only, a collection of police vans waiting for that night’s crucial Brighton vs Crystal Palace game.

Later, while hotel spotting I came across this view, and was pleased to squeeze in the angel Peace Statue bottom right. 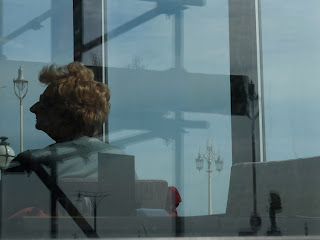 By the end of the day’s wander, I had around six shots that I would consider candidates for the project – not all standalone winners but all shots that might fit well in the final edit of around 60 pictures. A good day, and then past 4 million football fans at the train station, and back on the 6.28 train to Weymouth. 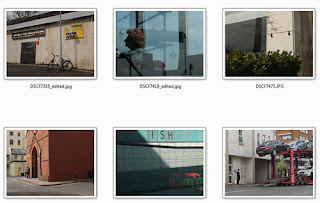 A small sample of photos from the first 2 months of this project can be seen here: