Visit 16 wasn’t much to write home about. Visit 17 on Bank Holiday Monday, 27 May didn’t get off to a promising start either, as trains were stopping for the morning at Worthing, several miles short of Brighton, due to a fatality further along the line.

I intended to wander around Worthing for a couple of hours until the lines reopened and I could continue my journey. On the off-chance, I rang up an old colleague from a communications agency that I’d worked at 15 years ago in Worthing to see if he wanted to meet up.

I hadn’t been in touch with David Blann for over 10 years, but by a spooky coincidence when I bought my copy of 2012’s The New Encyclopaedia of Brighton* a few weeks ago, he was credited as the book’s designer, along with his phone number. Cue Twilight Zone music. As it happened, this kind-hearted designer for print (Creative-Director-at-David-Blann-Design-and-available-for-freelance-work) ended up giving me a lift to Brighton, so that worked out well.

To Brighton
It turned out to be a satisfactory day from a photographic point of view (although confusing for my GPS software not to start and end at Brighton station). Along the way I learnt a little about the life of Lee Miller, which I might blog about a bit later. Two of the photos I was reasonably pleased with were taken within a few minutes and metres of each other – often the way – one thing leading to another.

The first reminded me of the old “problem” about how far away or indistinct the putative subject of the photo can be, and still maintain interest. 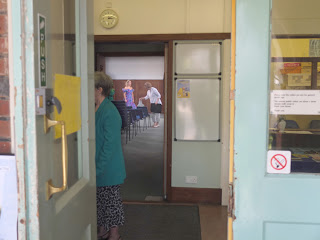 As Szarkowski said about later period Winogrand in the essay from Figments from the Real World [p. 38]

"Winogrand made thousands of pictures of people who were too far away to be described in detail, perhaps to test how much could be conveyed in terms of posture, stride, silhouette, autographic gesture. … Surely he was interested in the formal photographic problem: What was the greatest distance at which [they] could be convincingly described?"

And the second testing the limits of the camera: 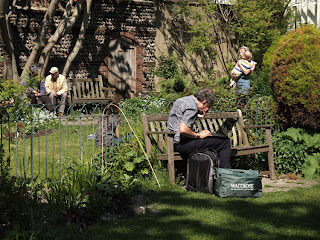 And plenty for my growing ‘pleasant-abstract-but-doesnt-really-say-anything-about-Brighton or could-have-been-taken-anwhere’ categories, e.g. 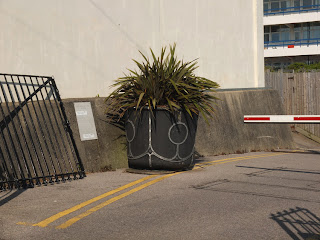 Again, a fair day's "work" done and a brisk walk back to the train station for the 6.33 for Weymouth.

*The encylopaedia is also available from Brighton Library for the same price.