I'm about half way through the Brighton project now in terms of visits - 20 visits made and a similar number to go.

I've made a rough edit of 57 photos out of 70 "possibles" out of several thousand taken. The majority of "surplus" consists of numerous minute variations of the same shot for the static, non-peopled stuff. I like doing those sorts of shots, but it's hard work - I never have the confidence to take just one of a given scene and then move on, as Eggleston claims to do...

I'm reasonably pleased with the results so far - a consistent look and hopefully free of Brighton cliches. While not avoiding the seafront altogether, the catchy phrase that sometimes pops into my head is "the city behind the seaside". 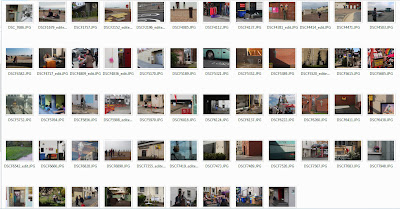